My preferred platforms are Windows Server (for Windows applications obviously) and Debian (for Linux - which in my case includes Docker). However, I want a single username to be valid and useful in similar ways across the two environments.

I've always preferred joining my Debian servers to AD, and getting authentication to work is pretty easy. Recently, though, DNS dynamic update has not been so cooperative.

Ideally I want similar basic functionality across the Windows and Debian environments. Note that most of what is here probably applies to Ubuntu without much change, but RHEL and its relatives obviously use slightly different configuration files, commands and tools (especially for package management). Since I haven't installed a RHEL variant for at least a decade, it's probably safe to assume I have zero knowledge there.

So what does that mean to me?

That's really not a huge list, but it does make it simpler to correlate actions by individuals across the estate.

This is all native Windows functionality; Linux is a different beast. I started with Debian Stretch 9.7 (booting from the 9.6 NetInst ISO image). It's a simple base build:

Running quickly through the installer screens:

Install takes me about 5-10 minutes depending on prevailing conditions, including local wind speed, the direction of flight of any observed birds, and the amount of coffee left in the cup. Once install is complete, restart and log in as root.

Edit /etc/network/interfaces if you're not planning to use DHCP - mine looks roughly like this:

Check /etc/resolv.conf to make sure DNS configuration is correct, perhaps similar to:

I then added the following components with apt:

Join the domain with realm:

Edit /etc/sssd/sssd.conf to tweak the sssd configuration to preference:

Create the base folder for home directories:

Restart sssd to effect the changes

Enable sudo for Domain Admins (and/or other groups as desired) - this example is very permissive, but it suits the environment:

At this point, you're probably expecting everything to work. I did. I was wrong. The Debian server just will not register with AD DNS.

On the AD side, I turned on debug logging, for updates only, but all other details: 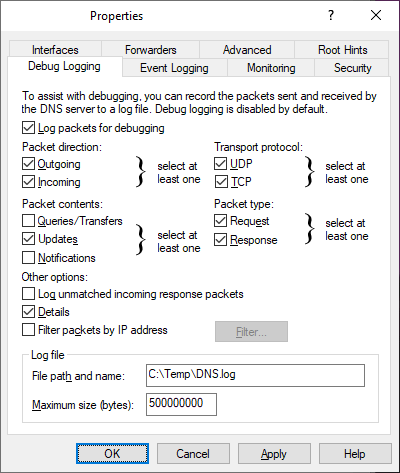 Then, I set debug_level to 10 in /etc/sssd/sssd.conf, and restarted sssd:

/var/log/sssd/sssd_ad.domain.net shows the details of the DNS registration - the error was as shown below:

The debug log on the AD side showed a similar failure pattern, with the AD DNS server refusing the update.

Turning off Secure updates permitted the name to register, but that's not a long term solution. A number of other causes were proposed:

Research suggested there was a bug in sssd, v1.5.0 - which just so happens to be the version available in Debian Stable. It was in a Reddit post I cannot find at the moment.

Instead, I had to update the rest of the system from stable to testing - I don't think this is the most terrible scenario in the current "everyone on the bleeding edge all the time" world. It's still software that has two weeks without bugs being logged against it, so it's not generally rushed.

Hypothesis: It's not just sssd that requires updates, it's also nsupdate (dnsutils package) and all the dependencies of those packages.

The suite of changes are all to files that drive apt behaviour. Note that there might be better ways to do this, but it worked for me:

Now update and upgrade. There were more than 310 changes for me:

You're going to want to restart, now, because there are changes to systemd among other things. Restarts are needed.

Remove your debug level from sssd.conf, too, else you'll end up with huge log files in /var/log/sssd.