Here’s a little tip from a colleague of mine, who we’ll call Geoff for no reason other than that that is his name.

When deploying images from Windows Deployment Services (WDS), sometimes the WDS server seemingly does not respond for about 10-15 seconds, even if the response delay is set to 0 seconds. The server will be authorised, it will have boot images, but the PXE “spinning bar” sits there attempting to hypnotise the user instead of booting from the network.

The cause appears to be DHCP configuration. Here’s a screenshot of the WDS console attempting to explain option 60: 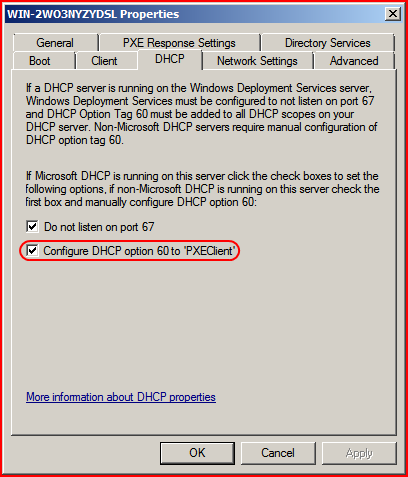 And here’s the help information for option 60, referenced directly by the link at the bottom of the dialog:

The reason you must configure these options in this scenario is because, DHCP must inform the client computer that there is a PXE server listening on the network by including DHCP option tag 60 in the DHCPOffer packet. In addition, because DHCP listens on port 67 by default, when Windows Deployment Services and DHCP exist on the same computer, the Windows Deployment Services PXE server is not able to listen on port 67 for incoming PXE boot requests.

As you can see, the documentation is of no help. So instead of trying to set option 60 to “PXEClient”, set it to the IP address of the WDS server.

I did this in my test environment and the average boot time of both new and existing PXE clients went from 25 seconds to 2 seconds.